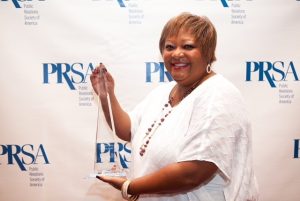 On 9 October, Sheryl Battles, VP, Global Diversity, Inclusion, and Engagement, received the 2018 D. Parke Gibson Award from The Public Relations Society of America (PRSA). Named for an industry legend, this award is PRSA’s highest individual honor presented to a public relations professional who has contributed to increased awareness of public relations within multicultural communities and participated in promoting issues that meet the needs of these diverse communities. The award was presented at the PRSA 2018 International Conference in Austin, Texas.

Throughout her career, Sheryl has focused on the critical intersection of diversity, inclusion, engagement and business results, leveraging them to help drive business and individual success. This recent recognition is both a salute to Sheryl’s passion and leadership as well as a spotlight on Pitney Bowes legacy of diversity and inclusiveness. “Diversity and inclusion are not just ideas that were adopted in response to modern influences or the result of one individual’s work,” said Sheryl. “They have been a hallmark of who we are for close to a century now and have shaped our character and values from the inside out. Our culture of inclusiveness has made us better together for almost 100 years and will be our advantage for the future.” 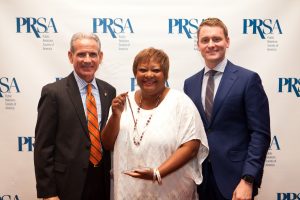 This distinguished award is just one of many professional and community honors Sheryl has earned during her career, including being named 2018 100 Most Influential Blacks in CT by the NAACP, Business Person of the Year by the Stamford Alumni Chapter Kappa Alpha PSI and the Stamford Alumni Diamond Foundation, 2017 Most Powerful and Influential Women Award from the Tri-State Diversity Council and Diversity Magazine’s Most Influential Woman in Global Diversity.

In addition, Sheryl has been recognized by Pitney Bowes for her exceptional contributions with several awards, including the company’s highest employee honor – the Walter H. Wheeler, Jr. Award. She is a three-time winner of the Pitney Bowes One Standard Excellence Award for outstanding team accomplishments.

She is also one of the professionals featured in the new book “Diverse Voices:  Profiles in Leadership” which shares the career experiences of multicultural comminutions leaders and professionals:  www.diverseleadership.net

PB’s Commitment to Learning
Cookie Control: We use cookies to ensure that we give you the best experience on our website. Some of these cookies are essential to make our site work and others help us to improve by giving us some insight into how the site is being used. By using our site you accept the terms of our Privacy Policy.OkPrivacy policy
Scroll to top