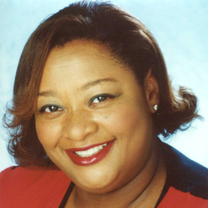 On Saturday night as I watched the news with tears in my eyes, I felt compelled to write this blog. I felt afraid — as an African American woman, wife, and mother — at how easily my face or that of any family member or friend could have been transposed on that of George Floyd. I felt disheartened at the reality that for some people the color of my skin obliterates any regard for my intellect, accomplishments or character. I felt anguished that the messages I spend my time living — of treating one another with respect and being stronger together — would be forever overshadowed by these images of frustration and disruption. I wondered where do we go from here?

An email exchange with our CEO Marc Lautenbach let me know that he was also thinking about the way forward. I am so proud to have a leader who is willing to speak up and voice his concern and commitment both internally and externally. The Business Roundtable, an organization of prominent CEOs in which he is very active, has also released a public statement condemning racial injustice and supporting diversity and inclusion which I encourage you to read as well. Marc’s deeply held belief in equitable treatment in the workplace, is a continuation of our storied history as a company built on diversity and inclusion. It is centered on the fundamental importance of being human.

In the 1961 book “The Story of Pitney-Bowes” written by William Cahn, it was noted that CEO Walter Wheeler also focused on the importance of the “human” in the workplace in his over three decades in office. Now, almost 50 years after Wheeler’s retirement, the increasingly divisive public discourse and disquieting events such as the tragic death of George Floyd, remind me how important it is for each of us to remember our common humanity. How important it is for our actions to be guided by treating all humans with dignity, fairness and respect.

By embracing the humanity of our diverse workforce here at Pitney Bowes, we have also learned to celebrate our differences. The character Piglet from the children’s story Winnie the Pooh observed, “It’s the things that make me different, that make me, me.” Pitney Bowes strives to make this a place where all voices are valued, and we all can grow and make meaningful contributions to our success. We want everyone to feel that they belong and know that they are safe to bring their whole self to work. When we hire an employee – it includes all of the differences that make them who they are.

There are many layers of difference that shape and influence each person’s identity, experience and perspective. One of those is skin color. A layer of difference that tragically over time, has sometimes led to inhumane and unjust treatment by others. It is a global phenomenon known as colorism. Research shows that around the world the darker the skin tone, the higher the probability that the individual or group may be subject to unequal treatment. In his iconic speech on the steps of the Lincoln Memorial in 1963, Dr. Martin Luther King, Jr. famously said that he had a dream about a nation in which his children would be judged by the content of their character rather than the color of their skin. Unfortunately, almost 60 years later news headlines and images remind us that the nation dreamed of has not become a consistent reality.

At Pitney Bowes we know that the talent we need is not exclusive to any one skin color, geography, culture, age, gender identity or expression, to name a few distinguishing characteristics. We condemn racial injustice and are proud of the fact that people of color make up approximately half of the Pitney Bowes workforce. Our commitment to creating an inclusive, equitable environment for all is unwavering. We also condemn others who might be using those peacefully protesting for justice as the cover to stir up violent confrontation and vandalize and disrupt local businesses.

On Saturday night I momentarily questioned the way forward. Now, more than ever I am convinced that it is to remember the importance of being human. In our 100th year it is heartening to know that at Pitney Bowes, we are still united by our humanity and celebrate our differences. We need the unique contributions of each employee to collectively deliver our best. We always have. We always will. It makes us who we are.

The Future of Work

Honoring Pride Month 2020
Cookie Control: We use cookies to ensure that we give you the best experience on our website. Some of these cookies are essential to make our site work and others help us to improve by giving us some insight into how the site is being used. By using our site you accept the terms of our Privacy Policy.OkPrivacy policy
Scroll to top