As LGBTQ+ Pride Month closes, take a moment to celebrate the strides made in the fight for equality, honor the heroes who forged the path to real change, and commit to creating a fair and just world for all marginalized communities. 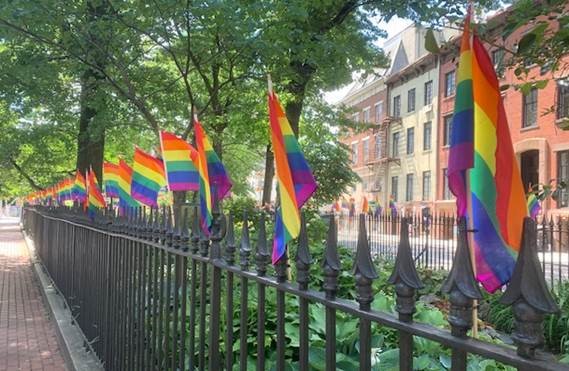 Photo taken by Bill– This is the perimeter fence of Christopher Park, aka Stonewall National Monument, across from the Stonewall Inn in Greenwich Village.

The path to progress is never a straight line, but knowing progress is possible should embolden us to continue marching forward.

And continue we must:

• This map of sexual orientation laws shows the wide variance of protections and criminalization of same-sex acts around the globe.
• Transgender people continue to face extreme discrimination and violence. In many countries, according to the National Center for Transgender Equality, transgender people’s very identities are criminalized.
• And, while Black Lives Matter has sparked the beginning of massive change, reforming entrenched policies and behaviors in a divided world will take time and tenacity.

Be a force for positive change

The bedrock value of Pitney Bowes is doing the right thing, the right way, yet, as Marc Lautenbach recently said, “We haven’t always gotten it right, but it is important now more than ever that society has examples of institutions trying to get it right. PB should lead. It is who we are.”

By having courageous conversations, making meaningful change in and out of the workplace, lifting others’ voices when we don’t have the words, and respecting one another’s dignity and humanity, we can each take pride in being a force for progress.

Employees and retirees mentor entrepreneurs
Cookie Control: We use cookies to ensure that we give you the best experience on our website. Some of these cookies are essential to make our site work and others help us to improve by giving us some insight into how the site is being used. By using our site you accept the terms of our Privacy Policy.OkPrivacy policy
Scroll to top